Malaysia, truly Asia- is a dream country in itself with diverse landscapes, culture and activities. Voyagers have endless places to visit in Malaysia from walking around Penang’s UNESCO listed George Town to Malacca’s historical core. While you explore the isolated islands to spending pal time in Borneo’s 130 million-year-old jungle.

Malacca City is the capital of Malacca state that oozes with antiquity and culture. Since 2008, it has been featured as a UNESCO World Heritage Site. Along the Straits of Malacca lies the colonial city that attracts the Malacca visitors due to its popularity in architecture. It is famous for its food and Jonker Street Night Market. This historical city has experienced periods under Portuguese and Dutch along with 15th Century Malacca Sultanate that is widely considered to be a “Golden Age” for Malay culture. The top attractions are St Paul’s Church, A Famosa Fort and Stadthuys that is the official residence of the Dutch governor. 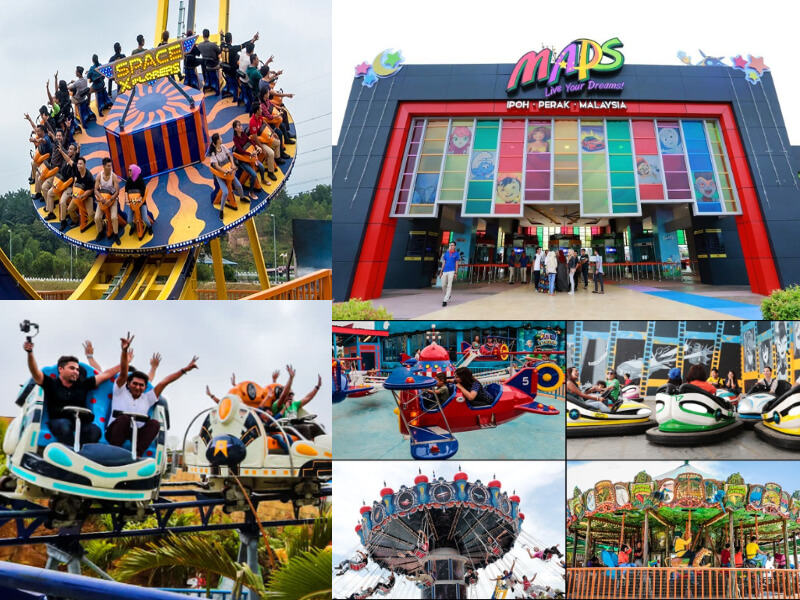 The capital of Perak is named Ipoh that is enjoyed a lot currently by tourist. It is becoming a top place to visit in Malaysia as it is referred to as “The City of Bougainvillea” after the colourful flowers that are surrounded by rugged limestone hills. This unknown place is becoming famous among the tourists. This historical core city is famous for its colonial buildings and traditional shophouses along with the plethora of Buddist and Hindu cave temples that surround the city. A short drive from the city takes to Kellie’s Castle that is an incomplete colonial mansion.

The top place that is featured to visit in Malaysia is Penang. This city is named after the pinang tree that looks like a palm tree that is situated between Butterworth on the mainland and George Town on Penang Island. George town is also an open museum. A wide selection of British buildings, churches and Fort Cornwallis is boasted by the colonial district. The traditional shophouses seen while sauntering the street makes us witness the creativity that is designed and styled in our own ways. The walls are decorated with street arts and murals. This place is a combination of history with temples that includes Kek Lok Si, its famous food courts and vibrant shopping scene and the country’s longest coffee shop.

If you want to experience the untouched jungle and ecotourism of Malaysia, this place is worth visiting. The traditional area boosts implausible biodiversity, as it is located deep inside the 130 million years old lowland dipterocarp forest. This area is home to thousands of species of flora and fauna that is surrounded by 438 square kilometres. While your visit; if you are lucky enough you may come across, orang-utans, pygmy elephants and clouded leopards. The lack of human settlement makes the Danum Valley getting a purer environment. The habitats are been devastated by charting and deforestations throughout Sabah but not inside the endangered area. These activities included jungle treks that are accompanied by experienced guides. The night safaris and a visit to the ancient Kadazan Dusun burial site.

Since the 19th century, The Cameron Highlands is among the most favourite place to visit in Malaysia. In 1885, the region was discovered by the British surveyor William Cameron and is a large growing tourist spot. The highlands ranges from 1100 metres to 1800 meters that produce a cooler and fresh climate. The emerald green tea plantation is leading the skyline along with strawberry and vegetable farms.

Pangkor Island is derived from “Pang Ko” located in Perak. In the straits of Malacca is this small archipelago. The tourist witnesses an undeveloped tropical paradise with this haven for fishers, sailors and pirates that is unchanged for several decades. The rest of the activities includes motorbiking, driving around the island’s perimeter, diving, snorkelling, etc. it has a population of only 30, 000. On the West Coast lies Teluk Nipah; which feeds up more than 30 wild hornbills every night at 6:30 pm.

Kota Kinabalu is the capital of Sabah that is a beautiful sight after its visit. The iconic floating mosque and the gorgeous orange sanded coastline behind the busy malls and building makes the city naturalistic. The most spectacular sunset is been visible at Tanjung Aru Beach.

The state of Kedah is visited to spend time in Langkawi. Alor Setar is approximately 55 kilometres southeast of popular islands. The main attractions here are the intricate Zahir mosque, the Big Clock Building, Royal Hall and Sultan Mosque with a fountain at the centre.

In the 1970s Time Magazine announced this place as the most beautiful in the world. From the publication, little changes have been made as Tioman Island has been located to the east coast in the South China Sea making it the top place to visit. Langkawi has been the most beautiful place as it is filled with dense rainforest and untouched beaches.

The main coral surrounded by islands that consist of the aptly named Besar and Kecil that is Big or Small makes it the most beautiful place as it is located in the South China Sea. The beaches are surrounded by crystal clear white sands. Those trying to visit should avoid from March to October when most of the hotel and guesthouses are closed.